Why SHOULD you care about digital security?

February 15, 2019
As a middle school digital literacy teacher, one of the toughest topics to unpack is online surveillance. When we start discussing the Patriot Act and the use of cell-site simulators by some local law enforcement agencies, for example, I worry that students walk away from class feeling frightened, with vague notions that “the government” is “watching” them. While I don’t want to sow the seeds of paranoia, the fact is that government agencies (and corporations, and hackers) really are watching what users do online, and I want my students to know about it. So together we build understanding of what governmental and corporate surveillance looks like, who sponsors it, and the motivations for this surveillance. We also look at how protections from surveillance differ around the world.

But inevitably comes that comment. You know the one. We’ve all heard it: from friends, coworkers, family members.

“Well, I don’t care. I’m not doing anything wrong so I have nothing to hide.”

Enter Kade Crockford’s 56 second video, "Why should you care about digital security if you’re not a target?" Crockford is the Director of the Technology for Liberty Program at the ACLU of Massachusetts, which “works to ensure that new technology strengthens rather than compromises the right to free expression, association, and privacy.” Crockford’s blog, Privacy Matters, fearlessly covers those under-the-radar stories that have huge impact on our technology ecosystem. “Privacy can’t protect itself,” the blog’s tagline reads.

The setting of this video conveys authority: Crockford is standing in front of (what I assume are) shelves of law books, and the camera angle (coming from below) is commonly used to make the subject appear powerful. At the same time, though, Crockford looks right into the camera, forming a connection with the viewer. And though clearly scripted and practiced, Crockford’s cadence and inflection conveys a relaxed attitude. It’s a simple production, allowing the viewer to focus on the idea. In fact, Crockford is never even explicitly introduced; you would only know who the speaker is by reading the description underneath the video, which has been uploaded to the ACLU of Massachusetts’ YouTube channel. Crockford immediately jumps into answering the question posed by the video’s title.

The central argument of the video -- that measures should be taken to protect digital communications -- has been made before, but for different audiences and with different motivations. The need to protect computer systems against viruses has obviously been established, especially as more and more devices become connected to the Internet via the Internet of Things. In a 2014 interview at SXSW, Edward Snowden (videoconferenced in from Moscow) argued the need for stronger security practices, appealing to businesses to help establish a pro-security norm. Security experts have also made the case for businesses to focus, interestingly, on both security and privacy in order to truly ensure the protection of the personal information collected by these businesses.

But Crockford isn’t talking about viruses, or refering to the security practices of businesses. Crockford is speaking to individuals, and appealing to viewer’s empathy. Crockford draws an analogy between herd immunity -- the principle that sees a community protected from a particular disease when a sufficient percentage of individuals within the population are vaccinated against the disease -- and encryption. In the video, Crockford says: 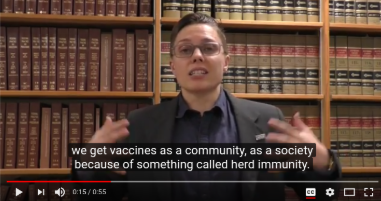 “How is encryption useful for people who are not targets of government surveillance? Well, it sort of works like vaccines… Maybe you are not likely to get the measles, but we get vaccines as a community, as a society, because of something called herd immunity. If we all do it, the weakest among us are protected from diseases like measles and mumps. The same thing is true with encryption. Maybe you yourself are not going to be a target of government surveillance in a special, individual kind of way. But what about other members of your community? Muslims, dissidents, young Black people, immigrants -- those people are targets of government surveillance. And if you want to help protect them, you should use encryption because doing so works like herd immunity with vaccines. It makes it so that those communications don’t look suspicious and it pushes back against the government’s argument that somehow encryption means you’re doing something wrong.”

Crockford is tapping into the desire of many to protect those who are most vulnerable in our society. The central idea of the video effectively reframes the issue: if we all adopt these digital security practices, then the argument no longer hinges on the idea that some people have something to hide, but rather that everyone has an equal right to private and secure communications. The simplicity of this appeal to empathy, coupled with Crockford’s inviting and trustworthy presentation, makes this an irresistible argument. And the bite-sized, highly shareable nature of video is perfect for the social media age.

Of course, the rise in the visibility of the anti-vaxxer movement may lead some to immediately dismiss this argument. And unfortunately the will to create policies and practices based on the protection of the most vulnerable can waver along political party lines, so I’m not sure how this argument would land across the political spectrum. But I don’t think that universal appeal is the primary purpose of this video; rather, I think the purpose is to speak to those who already identify as allies of social justice causes, and convince those people to adopt encryption as part of their digital hygiene. This short video also never gets to how people can encrypt their digital communications, but that also isn’t the point. This isn’t a how-to video; it’s persuasive, more of a why-should-I video. And in this case, that’s already a big enough job.

Popular posts from this blog

May 12, 2019
And just like that, EDC534 Digital Authorship comes to a close. This class came at the exact right time for me as I start my new position in a new district. I'm excited to embark on the action research project I've laid out in this final project. Over the next year I will consider: How can technology integrationists utilize digital citizenship themes when working with teachers? Can digital citizenship inspire new ways of utilizing digital tools across the school curriculum? More in my ignite video below.

Thank you to my classmates and to Dr. Hobbs, for continuing to inspire with content and pedagogy. I've learned so much. See you all this summer at the Summer Institute in Digital Literacy!
Post a Comment
Read more

Creating to Learn: A Powtoon

This project was admittedly a bit outside my comfort zone. Write an essay? Sure, I can do that. Develop a collaborative video? That made my palms sweat a bit. As my partner, Jessica Cabral-Lafreniere, and I said over email, collaborating digitally wasn't simple. We used various tools for assistance: email, a Google Doc for co-note taking, then this Powtoon. We came together over a vague theme -- goals of digital learning opportunities in the classroom. We were each approaching this from different perspectives though (me from secondary education, she from primary; me from the classroom, she from a school library), and so what we each saw as goals was slightly different. I was inspired to think about this as I start a new job and begin conversations with teachers at all ends of the digital learning spectrum. It was helpful for me to re-answer for myself the question: yeah, why SHOULD we be getting studen…
Post a Comment
Read more

September 19, 2019
“Reader” has long been a facet of my identity. I was one of those kids who would bring a book to read at the table when out to eat with my family. My “journey to reader” wasn’t always a straight line though. Due to a surgery, I missed the first couple of months of 1st grade, which set me back in my reading development for the rest of the year. I remember reading haltingly and nervously, slowly sounding out each syllable and for awhile just not enjoying the process. Thankfully my parents were able to get me a reading tutor the following summer, and I somehow made up for lost time.

Then came college, where, as an English major, I suddenly had hundreds of pages of reading to do each week, and I just couldn’t do it: I couldn’t comprehend complex text at that volume. So I froze in anxiety about it and just… didn’t attempt to. I’m not proud of it, but my inability to successfully complete and comprehend all of my reading led me to even attempt very little of it. My “reading” at that time in…
Post a Comment
Read more